Apple’s New App for Personal Health Information: Is It a Game Changer? 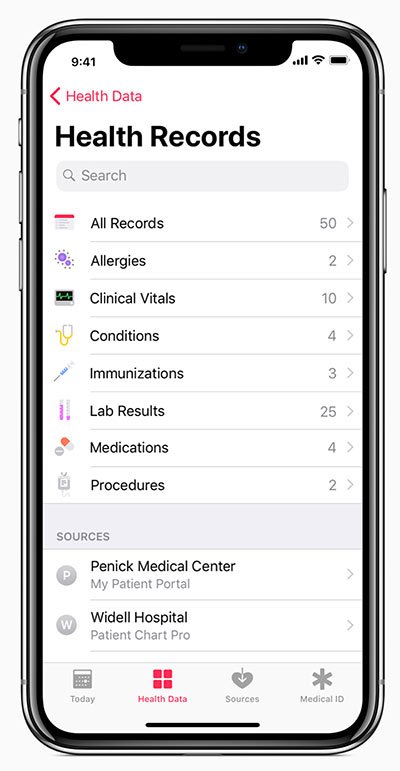 Apple recently announced a new application (app) that enables patients to aggregate much of their personal health information from various providers and see it on their iPhones. Apple’s Health app extracts the information — including data on allergies, conditions, immunizations, lab results, medications, vital signs and procedures — from the providers’ electronic health records (EHRs). The app takes the data from the EHRs and brings them together in a new personal health record (PHR), which is available at any time and any place.

Is this a game changer? It may be too soon to tell, but the industry is ripe for disruption and this has the potential to be a disruptive technology.

The app is being pilot tested with a handful of hospitals and health systems whose EHRs (primarily Epic) represent a large but incomplete portion of the market. And now Apple just announced that 39 health systems are adopting the new Health app. It is worth noting that many of these health systems use only one EHR; as such, there is a more limited need to share data with patients seeing providers outside these health systems.

Apple. This could be advantageous for Apple by addressing several challenges. Health creates a new and potentially large niche market, which could help boost sagging iPhone sales. The Health app has the force, branding and cache of Apple behind it, creating a competitive advantage.

Use of this app requires the consumer to have a top-of-the-line iPhone, creating hardware demand for Apple. However, this shortchanges many smartphone users. Half are using Android-based technology and many people cannot afford a pricey new iPhone. In addition, the economically disadvantaged and the elderly, who tend to live in the digital divide, are being frozen out of this opportunity. On the positive side, this offering addresses the reason for the demise of early personal health records initiatives — requiring the consumer to add information from multiple providers to their own PHR.

A significant drawback is that, at least initially, there is no data pathway back to the physician’s EHR. Such a pathway would be beneficial for many reasons, such as correcting mistakes patients detect in their health information or in the event they are seeing a provider outside the health system that provided the data.

EHRs. Apple’s new app is not an immediate, direct threat to EHRs, which still must be used to capture patient information at the point of care. That said, Apple Health is a large shot across the bow to EHR vendors about accessability of their data and new ways to achieve interoperability.

The app could be revolutionary on the technical side. Apple Health is touted as being able to reconcile the disparate code sets and uncodified data among hundreds of different EHRs available in the market. This issue has challenged interoperability between EHRs for a long time. If the reconciliation capability is as advertised, it opens the door for vendors to leverage Apple as the interface engine. Rather than developing to each EHR’s application program interface (API) or attempting to map code sets, vendors can instead develop to Apple’s API, which will enable connectivity to all EHRs.

The app also could be a game changer by addressing another long-standing challenge: patient identification. A separate patient identifier is not needed. To use the Health app, patients must identify themselves by logging in through the provider’s patient portal. Assuming that patients opt in, patient identification will be solved. Patients traditionally have not been motivated to access provider portals except in these large health systems that are part of this pilot project. So, the jury is out as to whether patients will opt in to the Apple model.

Standards. Apple’s Health app is based on FHIR (Fast Healthcare Interoperability Resources), a new standard that is viewed as a game changer in its own right for app development. Now that FHIR has been demonstrated effective, developers can create all kinds of FHIR-based solutions to enable access to clinical data. This access could ultimately change how EHRs are used. Spurred by requirements of the 21st Century Cures Act, the health care app market is already robust; Apple’s FHIR-based entry adds more spark.

Patients. Time will tell whether patients will get onboard with Apple Health. This approach could be appealing to many patients, especially younger ones for whom use of mobile devices is second nature. App use could increase patients’ engagement in their care, which has been a goal in search of a solution.

There is no guarantee, though, as to whether patients will want or use Apple’s Health app. Patients claim they want more access to and control over their data, but there is little evidence they are motivated to make that a reality. The health care landscape is littered with failed or underused PHRs, including those offered by Google and
Microsoft.

Even once they’ve opted in, there’s no assurance that patients will comprehend the information once they have it in hand. Information must be understood if it is to have value and be acted upon. Medical care is a black box for most people and health literacy generally is very poor. Patients will not use an app if it overwhelms them with information they cannot comprehend.

Moreover, there is no guarantee that increased access to data leads to improved outcomes, regardless of how much patients learn to care about their information.

Pharmaceutical companies. Pharmaceutical companies can start taking advantage of the opportunities created by the Health app and the others that are sure to follow. They can work with developers to create apps that are useful to consumers, easily installed, available 24/7 and customized to a patient’s health measures. Apps can help caregivers and patients turn massive amounts of medication data on their phones into actionable insights or practical use. For example, medication lists in the patient record can be used to create calendar reminders and help patients monitor their adherence. Apps using data in the PHR could collect additional symptom information or use the data to coach patients through an episode of care. Leveraging personal health data, apps also can help patients determine if they are eligible for clinical trials, as well as monitor their progress and report results. •

Apps are revolutionizing health care. Apple’s new Health app is the tip of the iceberg, although its impacts likely won’t be felt for awhile. Want to learn more? Reach out to me at brian.bamberger@pocp.com.