The May quarterly meeting of the National Council for Prescription Drug Programs (NCPDP) was a DERF-a-Palooza with lively discussion, debate and action on 25 DERFs that proposed changes to the NCPDP SCRIPT standard and the Formulary and Benefit (F&B) standard.

DERF is the acronym for Data Element Request Form, which is used as part of the process to recommend and approve modifications to NCPDP standards. The large number of DERFs considered in May were the result of the industrys desire to get proposed changes nailed down and approved so they could be incorporated into the next round of Medicare Part D standards adoption (see the timeline below). An irregular update schedule by standards development organizations (SDOs) has long been a pain point for many government regulators, not just the Centers for Medicare and Medicaid Services (CMS), which runs the Medicare program. As a result, regulations often were out of sync with the latest version of a standard.

NCPDP listened, and activities at the past several meetings represent a first step toward bringing regularity to the process. Kudos to NCPDP for taking the initiative and making this happen. While the timing of the May quarterly meeting may not get all the desired changes into the DERF queue in time for the upcoming release of NCPDP standards, this should be a temporary situation as the idea of a schedule irons itself out. We expect other SDOs will follow suit. After all, it is in everyones best interests to have the most up-to-date standards available for timely adoption by Medicare and other programs. 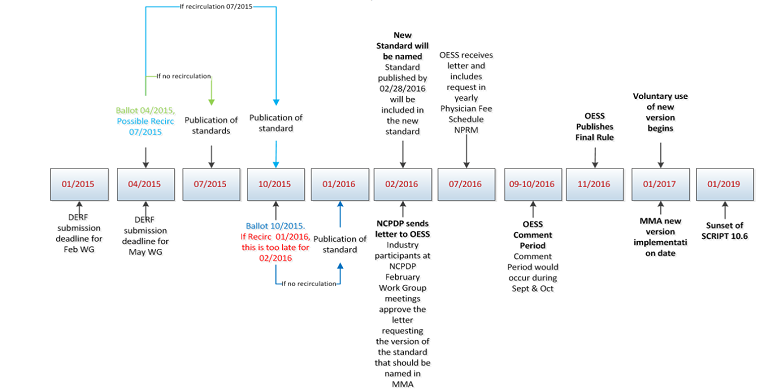 Here are some of the highlights of the NCPDP meeting.

Real-time benefit information in electronic health records (EHRs). The real-time benefit verification transaction is still a work in progress, with several related DERFS passed or pending at the May meeting. Use of this transaction would replace the downloaded data files that are used today, which have limitations due to latency of the update process and the quantity and quality of data. Real-time benefit verification will greatly improve the breadth, accuracy and effectiveness of formulary data available to the prescriber at the point of care. This will address the perception of many prescribers that currently available formulary and benefit data are either incorrect or incomplete, which has resulted in the current F&B transaction being sparsely used by prescribers. Having real-time benefit information in the EHR will enable prescribers to see dollar copay amounts for individual patients at the point of prescribing. This will help with formulary compliance and medication adherence because prescribers can see what drugs are on formulary and what they will cost out-of-pocket. As a result, they can prescribe a medication that will be covered by the patients insurance plan with the least out-of-pocket expenditures. Research shows that patients will abandon prescriptions if they are too expensive, or not take them correctly to save money.

Some proposed versions of the transaction give payers the ability to mention specific alternatives to a requested drug. This information was popular in retail and mail-order pharmacy messaging in the past and used to switch patients to preferred drugs, including generic alternatives.

As part of proposed real-time benefit verification, savings program offers could be displayed along with copay amounts. We are monitoring some early activity by payers to develop pilots. After initially slowing down the process, a few payers are moving forward with pilots to demonstrate its value. Although it may be some time before a standard is approved, the impact will be far reaching once use gains traction. It could also become a distraction and excuse for not fixing the systems and processes that exist today.

Mandatory inclusion of diagnosis. Adding the diagnosis to electronic prescriptions (ePrescriptions) was proposed to go from optional to mandatory in the SCRIPT transaction with the passage of DERF 1264. The workgroup stopped short of a mandatory designation, instead passing the DERF with language to make diagnosis “strongly recommended.” Diagnosis is among the many key pieces of clinical and administrative information that are needed, especially for prescriptions for specialty medications and now for biosimilars. Systematically adding the diagnosis to ePrescriptions would eliminate the need for manual entry, reduce opportunities for error, improve patient safety, expedite processing of prior authorization (PA) requests and make it easier and less costly to manage specialty medications throughout the continuum of care. The challenge will be integrating capture and inclusion of diagnosis into the ePrescribing work flow.

Electronic prescribing of biosimilars. A DERF was passed that adds manufacturer name and dispensed drug lot number to the medication history and Rx fill transactions. Biosimilars are becoming available in the United States, so having the manufacturer and lot number of a dispensed drug will be necessary to identify and track positive outcomes and potential adverse events (AEs). This information also will be needed as part of state substitution regulations. So far, interchangeable biosimilars may be substituted for reference products without prior notification in Colorado, Georgia, Tennessee, Utah and Washington State. While inclusion of these data is not mandatory, we expect pharmacies will start populating such data in the transactions and transmit them back to physician EHRs, ultimately making it easier to track outcomes and AEs at the point of care and complying with state substitution regulations.

Attachments. DERF 1292 introduced an indicator in the SCRIPT transaction to let the prescriber know an attachment is required for electronic prior authorization (ePA). It was ultimately approved, but a lively discussion ensued over a related but larger issue: the concept of an attachment in the age of ePA. EHR vendors would prefer to have information requested in the form of specific questions, which can be responded to with discrete data. In reality, attachments are outside the work flow of a paperless EHR. In order to create one, the prescriber must print something based on data already in the EHR, save it as a PDF file and then append that file as the attachment.

Industry pressure to utilize the SCRIPT standard to transact ePA, rather than attachments, will streamline the process for prescribers. The ultimate goal is to push the ePA transaction into the background in the EHR, with the data required for PA transferred to the payer without requiring prescriber data reentry.

Point-of-Care Partners is an active participant in NCPDP work group meetings as well as many task groups. Let us know how we can put that knowledge to work for you.