Legal opioid prescriptions often lead to abuse, fraud, diversion and addiction. Sadly, they are a root cause of the nation’s opioid epidemic. That is why states are using a variety of legislative and regulatory measures to address the opioid epidemic at the prescription level. A detailed look at these actions is in a new, first-of-its-kind report from Point-of-Care Partners (POCP). Fighting the Opioid Epidemic at the State and Rx Levels explains overarching trends across the states on opioid prescribing and provides the latest details on a state-by-state basis. 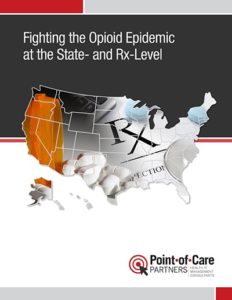 Unlike other reports in the marketplace, our new analysis is based on the most up-to-date information (as of January 2018) and focuses strictly on the range of state responses to opioid prescribing. These include changes in prescriptions and prescribing behaviors through laws and regulations, required use of electronic prescribing for controlled substances (EPCS), mandatory consultation of state prescription drug monitoring programs (PDMPs) and education for providers and patients.

However, the whos, whats, whys and hows of these key strategies vary across the country. In response, this new report was designed to help stakeholders understand the details and complexities of how states are handling opioid prescriptions. To be sure, electronic health records (EHRs) and health information technology (HIT) stakeholders can play a valuable role in facilitating prescriber compliance with mandated behavioral changes that will ultimately limit the number of future addicts. This is the subject of POCP’s next report, which will come out in this spring.

What the report contains. The 33-page report includes details of state responses to opioid prescribing organized around three main trends: prescribing, curbing fraud and abuse, and preventing and treating addiction. These analyses are supplemented with 12 figures, including state maps indicating required consultation of PDMPs by prescribers and dispensers. Specific details are summarized in two appendices. The first provides a state-by-state overview of controlled substance rules and limits, a portion of which is reproduced below. The second highlights controlled substance midlevel prescribing authorities. 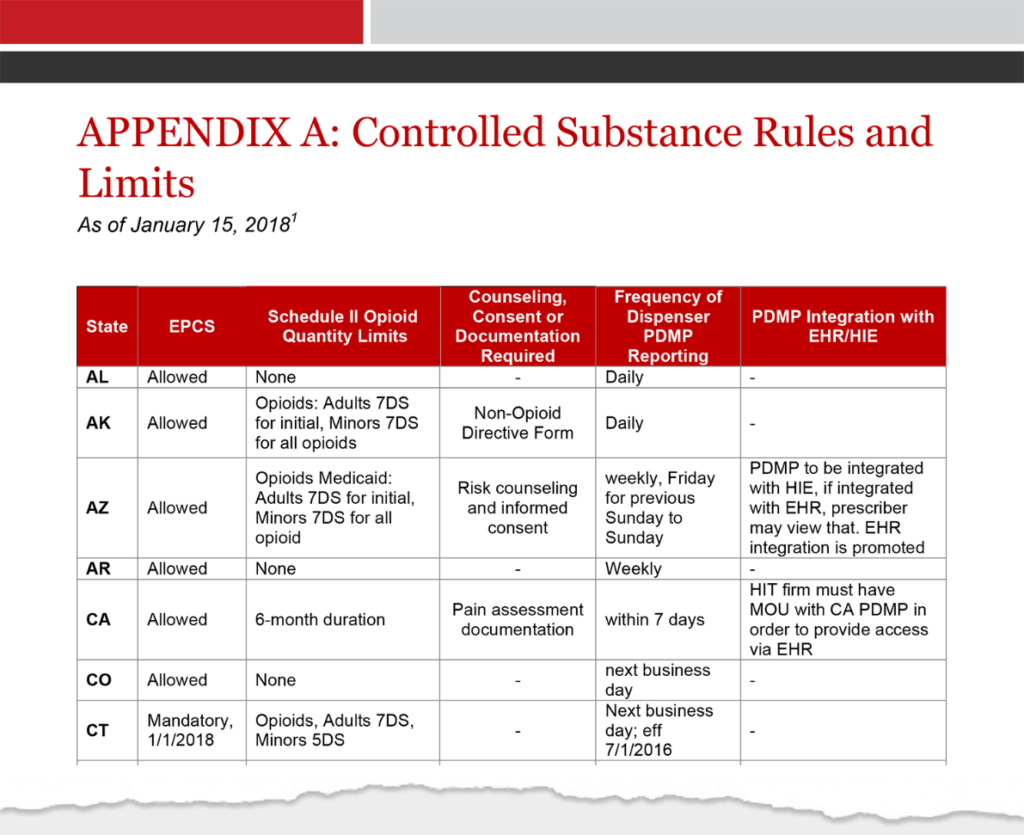 The analyses are based on original research and data collection by POCP’s Regulatory Research Center, led by Connie Sinclair, RPh, who is also the report’s lead author. The report’s content also was informed by POCP’s nationally recognized expertise in electronic prescribing, health information technology and eMedication management.

Findings. The POCP report has new and detailed data on state responses to opioid prescribing. Among the high-level findings:

Want to learn more about the specifics? Click here to preview or purchase the report. POCP’s Regulatory Resource Center also can do a deep dive on this and other state prescribing-related issues. For more information, contact Connie Sinclair at connie.sinclair@pocp.com.