HIT Perspectives: Thumbs Up at this ePrescribing Checkpoint!

Thumbs Up at this ePrescribing Checkpoint!

Since electronic prescribing (ePrescribing) was the first subject matter on which we focused, periodically we take a step back to ascertain where we are with this important function. Surescripts’ recently issued National Progress Report for 2017 is helpful in making this assessment. As the unquestioned leader in ePrescribing and related transactions, Surescripts’ annual report provides useful data showing much progress has been made and where there is work yet to do as it pertains to physicians transmitting a prescription electronically to a pharmacy and related transactions. This year’s report contains more of the solid information we had been used to seeing in earlier years.

The Four Phases of ePrescribing. The overarching takeaway is that we’re continuing to make progress but aren’t there yet. We see the evolution of ePrescribing as being in four overlapping phases: adoption, utilization, quality and optimization. 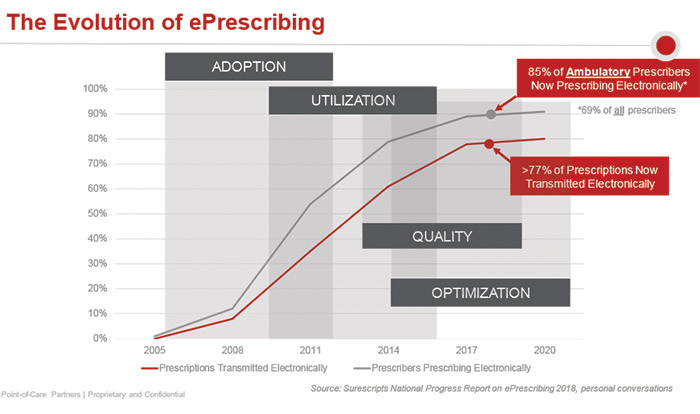 Quality-Related Transactions. The report clearly showed that we are firmly in the quality era, which is characterized by improvements in prescription quality. For example, growth in several quality-related transactions were noted:

Transaction Optimization. The optimization phase of ePrescribing is marked by several distinct trends. They include:
EPCS. EPCS mandates in four states (New York, Minnesota, Connecticut and Maine) continued to drive transaction volume. In 2017, 77.33 million electronic prescriptions were transmitted for controlled substances, increasing from 11% in 2016 to 21%. This mirrors the resulting growth in ePrescribing of noncontrolled substances when regulatory mandate overcame resistance to change — in the case of EPCS, to two-factor authentication — and workflow integration challenges.

EPCS volume will continue its rapid increase as more states pass EPCS legislation in response to the opioid crisis. Beyond the four states with mandates, seven have EPCS laws passed with future effective dates, an eighth state has an EPCS mandate law on the governor’s desk for signature and six others have legislation pending. Significantly, transaction volume may get a huge boost if pending federal legislation is enacted to require EPCS for Medicare Part D prescriptions. If that’s not enough, Walmart just announced it will require ePrescriptions for opioids by 2020. It’s likely that other chains will follow suit, leading to major EPCS volume increases.

ePA and RTBC. Optimization also can be shown through the growth of these two previously cited transactions. Individually, they can help improve drug price transparency at the point of prescribing. Together, they help prescribers identify the lowest cost medications that are covered by a patient’s insurance. Drug affordability and rising out-of-pocket (OOP) patient costs are hot topics in health care today. Studies have shown that patients do not follow through on prescriptions they cannot afford, leading to as much as $300 billion annually in unnecessary hospitalizations, emergency department visits and premature deaths. (See the article in this issue of HIT Perspectives for more detail about the need for price transparency at the point of prescribing.)

Want to learn more? To be sure, there is a lot happening in the world of ePrescribing. Have questions or need more information? Let our Regulatory Resource Center keep you on top of the dizzying world of federal and state laws and regulations. For more information, contact Keith Fisher (keith.fisher@pocp.com). As the nation’s leading experts in ePrescribing, Point-of-Care Partners can help you understand the changing ePrescribing landscape, educate your internal and external audiences and position your firm for success in the market. Please reach out to me at tonys@pocp.com.