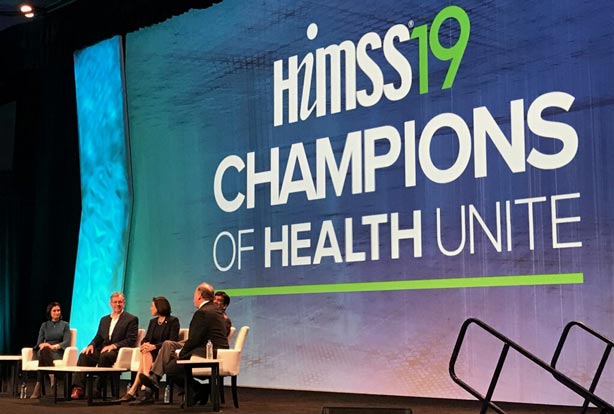 The book is closed on this year’s annual meeting of the Healthcare and Information Management Systems Society (HIMSS) in Orlando, the go-to meeting for health information technology (health IT). We understand that attendance was down slightly, but there still were more than 40,000 people who spent a lot of time and money to attend, exhibit and make presentations. With its notable focus on real-world efforts to improve the patient journey and noticeable C-suite attendance, the conference lived up to its theme, “Champions of Health Unite.” This makes HIMSS — without a doubt — the best place to catch up on the latest from vendors, clients and various stakeholders. The Point-of-Care Partners (POCP) team used its time productively through face-to-face discussions, attendance at sessions and presentations, discussions with exhibitors and investment of a lot of shoe leather.

There are plenty of reports in the media on various aspects of HIMSS 2019. Instead of a meeting summary, we offer insights on what we learned in Orlando and how they might impact the health IT industry going forward. Here are our top eight takeaways from HIMSS 2019.

To be sure, AI and machine learning are rapidly becoming tools to analyze the data needed for patient-specific clinical decision support and value-based care. Despite the hype, there was a bit of a reality check at HIMSS. Now that these tools are becoming available, stakeholders are becoming keenly aware of the sheer volume and complexity of information and the need to deploy it without burdening the physician with an avalanche of data.

However, Da Vinci’s momentum is best exemplified by being singled out by name in the proposed CMS rule including specific mention of Da Vinci’s Coverage Requirements and Documentation Rules Discovery use case and a direct statement that encourages all payers to align with the Da Vinci Project “to build an ecosystem that will allow providers to connect their EHRs or practice management systems and efficient work flows with up-to-date information on which items and services require prior authorization and what the documentation requirements are for various items and services under that patient’s current plan enrollment.”

That said, we saw some vendors focused on the long-term and postacute care market. These sites of care have their own specific health IT needs and challenges. Addressing them is an emerging area that we can expect to see more about as 2019 rolls on.

The POCP team was actively engaged at HIMSS and it was our best year yet. What we have reported here is a drop in the bucket. Want to know more? Reach out to me at tonys@pocp.com.